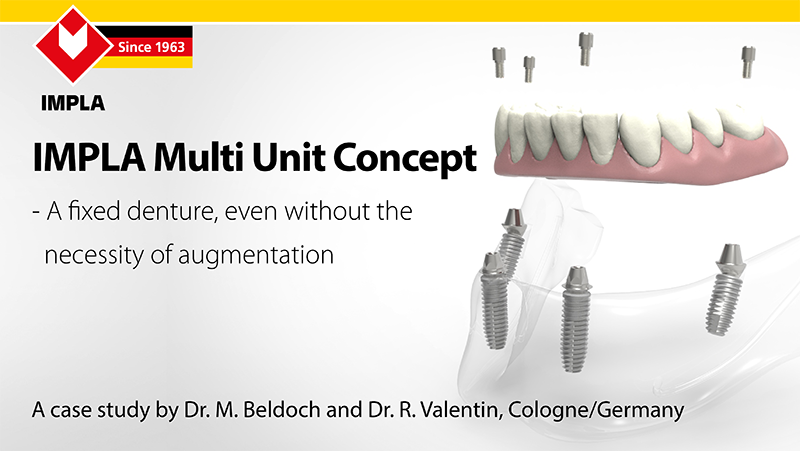 Clinical case
A 56-year-old female patient presented at our practice in December of 2016 with the desire for a restoration of her prosthetics. The case history was unremarkable and the patient is a non-smoker. The remaining dentition was not worth preserving. Therefore, we suggested a full denture. For the maxilla, we produced a subtotal denture. For the mandible, we decided on an implant-supported solution to ensure a stable fit of the denture despite an advanced stage bone atrophy. In order to avoid complex augmentative procedures, we created a removable denture on a bar construction that is supported by four implants. The distal implants were to be set in an angle to extend the support polygon. The patient was treated between January and December of 2017, using the Multi Unit Concept (Schütz Dental, Rosbach/Germany), as described step-bystep below.

Treatment schedule planning
Considering the reduced bone supply and the deficient bone height especially in the third quadrant, we planned the placement of four interforaminal implants in accordance with the Multi Unit Concept. The distal implants were planned with an angle of 30° (fig. 1: OPG, fig. 2 and fig. 3: Initial situation). The implants are placed interforaminally and the distal implants were inclined by 25°-35° in distal direction. This procedure provides an extension of the support polygon. The position of the distal implant is mesial and the implant exit point is above or distal to the mental foramen. Consequently, there is normally sufficient bone height even for longer implants with an accordingly higher stability.

First surgery: Extraction and augmentation
We started the treatment end of January 2017. The initial step was to extract the remaining teeth in the mandible as well as the remaining roots in both jaws. Next, we started an extensive augmentation at the place of the bone defect and of the missing bone lamella (area of lower right cuspid) with autogenous bone and xenogeneic material. The augmentation was covered by an absorbable collagen membrane. (extraction and augmentation, fig. 3-8). 10 days post-surgery, the sutures were removed (fig. 9).

Second surgery: Implantation
After a healing phase of approximately three months (fig. 10), the implants were inserted. First, we made a crestal incision from the area of the lower right cuspid to the area of the lower left 1st bicuspid, with distal relief incisions (fig. 11). The jaw ridge and the mental foramen were layed open. The bone graft was completely ossified (fig. 12 & 13). The implantation site for four implants was prepared in accordance with the drill protocol of the manufacturer (Schütz Dental, Rosbach/Germany). The distal implants were inclined by approximately 30° and they passed by the mental foramen mesially (fig. 14-16). After the insertion of the implants (fig. 17) and after covering them with healing caps (fig. 18), we closed the wound saliva-proof with a 3-0 silk suture (Schütz Dental, Rosbach/Germany) (fig. 19). The panoramic radiograph shows the situation directly post-implantation (fig. 20).

Re-Opening
8 weeks post-implantation we re-opened the implants (fig. 21 & 22). Next, we produced an individual tray for an impression (fig. 23) and took an impression with help of the Multi Unit impression posts and abutments (Schütz Dental, Rosbach/Germany) (fig. 24). After transferring the situation to the model (fig. 25), an acrylic pattern was used to create a transfer key (fig. 26-28). It was tried in (fig. 29) and the abutments were fixed (fig. 30 & 31).

Discussion
The concept of the distally angulated implants goes back to Kerkmanov, 1990 [Kerkmanov et al., 2000], but was only established at the beginning of the 21st century with the „All-on-4“ concept of Paolo Malo [Malo et al., 2003, 2005, 2006, 2007, Kathami & Smith, 2008]. This treatment facilitates providing a restoration for an edentulous jaw without complex augmentation, even in one of the many cases like this one, where there is limited vertical bone available in the posterior region of the mandible. In this case, the remaining bone height was not sufficient for an insertion of standard length implants in distal position from the mental foramen. Therefore, we decided on an interforaminal implantation. To extend the prosthetic support polygon, the distal implants were inclined by ca. 25-35° in distal direction, in accordance with the above mentioned concept.

The preceding augmentation of the bone defect after extraction in the area of the lower right cuspid was carried out with xenogeneic bone substitute and a collagen membrane in line with the „socket preservation“ [Troiano et al., 2017, Vignoletti et al., 2012]. The augmentation was extended to the other extraction sockets to optimize the situation for the planned implantation. The extraction as well as the bone augmentation and implant surgeries were free of complications and the wound healing was completely uneventful. The prosthetics were manufactured in cooperation with the dental lab Bisswerk in Aachen/Germany. With the prefabricated parts of the Multi Unit System (Schütz Dental, Rosbach/Germany), an individualization of the abutments could be foregone for an easier and quicker completion. The Multi Unit System was used in combination with cylindrical implants (Schütz Dental, Rosbach/Germany), as these implants offer the greatest primary stability due to their self-tapping thread and the cylindrical external geometry.

As a complete system, the wide selection of abutments as well as auxiliary parts for closed and open impressions offers easy and clear options for quick treatment concepts with angulated implants in the upper and lower jaw. Considering progress and the desire for easy-to-implement and economical solutions, using this system is the logical next step.

Especially for concepts of „everything from one source“, the use of the Schütz Dental Multi Unit System produces excellent results. 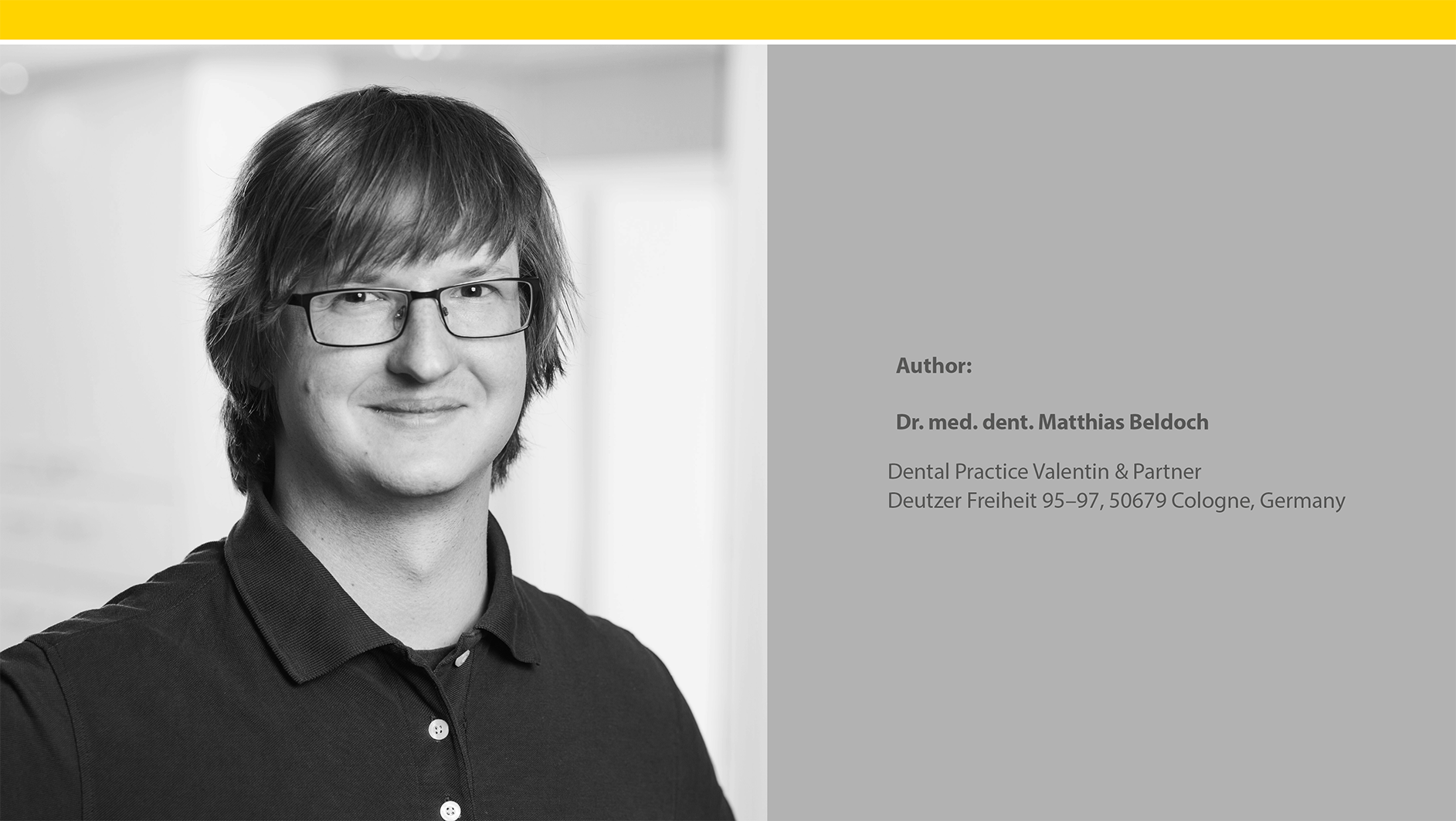 Please note: This case study is not an instruction leaflet. Please adhere to the instructions provided with the material and/or equipment. The responsibility for the treatment remains with the attending dentist.

Subscribe to the free Schütz Dental newsletter and ensure that you will no longer miss any of our offers or news.